to the Media library »

On what basis do you make a decision: Gut feeling or figures/data/facts? Do you use all the information you have at your disposal? Do you work with probabilities or mean values?

The tasks in risk management are getting bigger and bigger, but also the possibilities to control them. On the one hand, new business models or modular structures force a long-term and comprehensive risk assessment at a very early stage. On the other hand, modern data collection offers new possibilities for assessing risks. The question is: Do I use this potential in my analysis? We support you with our experts on the way from the first data viewing and evaluation, via parameter determination and model creation to a complete and comprehensive statistical risk analysis.

The results support your management and/or convince your customers. Secure your decisions and make full use of your existing but often undiscovered information and data. The rule here is: make a decision, don’t let it happen!

For almost every type of information there is a possibility to consider it analytically. We understand risk management as a combination of technical, business and organizational risks. Risk management is more than just an aggregated mean value and then a worst/best case classification: It’s about probabilities.

Once the first steps have been taken towards risk management, the advantages quickly become apparent. So let’s tackle it together!

The following methods are applied by us in risk management

Data analysis is often the highest initial hurdle, but one that is worth tackling early. Now is the time to position yourself well and make your data collection and processing future-proof. The following applies: The most complete and complex data collection is not necessarily the most efficient one. Not every effort to obtain or process data is justified. However, even in the concept phase it should be well considered which data will also be needed in the future. 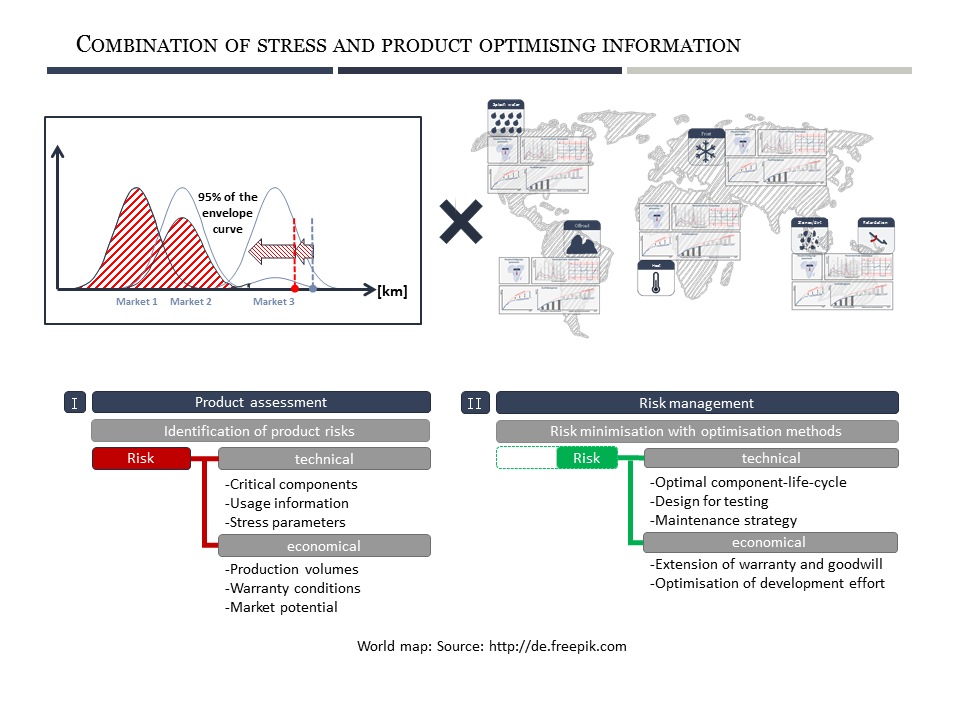 The risks of new business models or products usually depend on many parameters. These can be, for example, customer, contract or environmental characteristics. Many of these parameters can already be analyzed by existing information. A suitable parameter development is particularly important, since the results are usually used as input data in risk simulation models. Evaluate new products or customers on the basis of your current knowledge 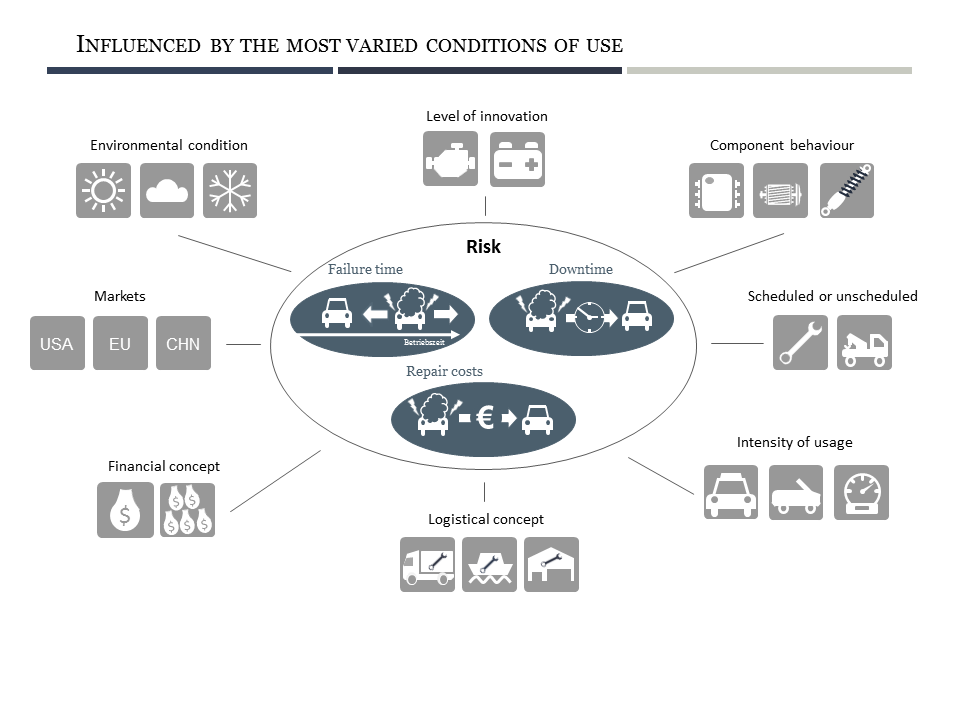 The consideration and evaluation of several risk parameters automatically leads to new methodological challenges. The highest level of mathematics or artificial intelligence is not always immediately required. The methods of multivariate statistics are in most cases well suited to evaluate the risk without unnecessary economic effort. Should an evaluation nevertheless turn out to be more complex, we have a broad repertoire of simulation and optimization methods as well as AI methods to analyze your risk. Unfortunately there is no standard approach, no problem is like the other. The type of analysis chosen is therefore decisive for the success of the model created. 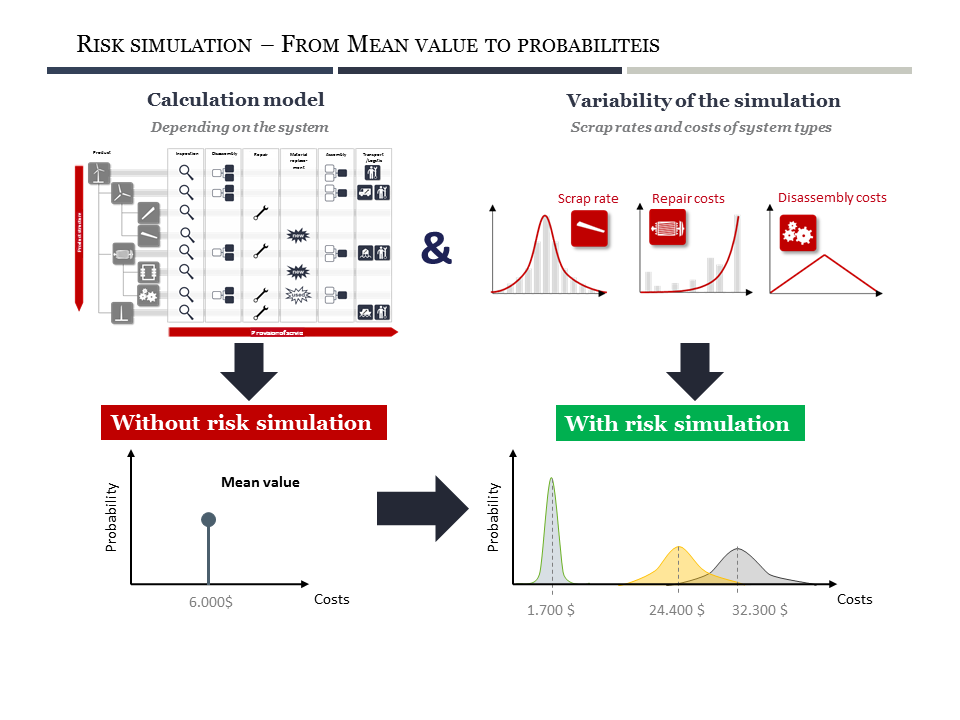 The results are available and what now? Conclusions must be drawn from the results and the results validated. In addition to an easily understandable visualization using distribution functions, risks can also be viewed and discussed at the detailed level. It is important not to lose the data reference. It can also be useful to generate key performance indicators (KPIs) in order to correctly assess the risk. Use the created solid data basis to create helpful simulation results. 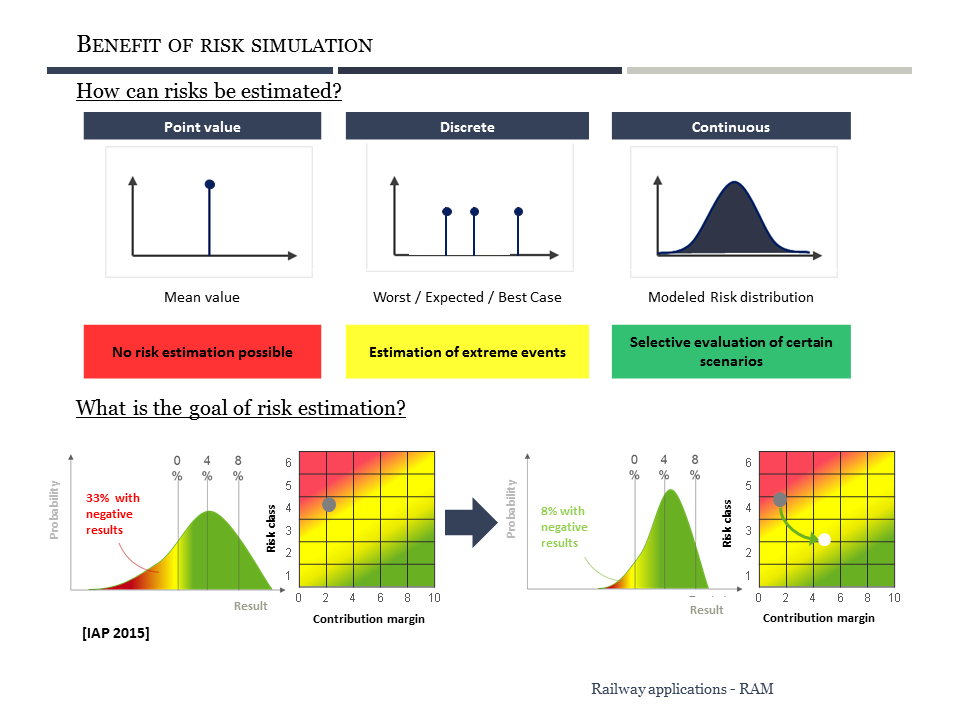 In addition to the risk assessment, recommendations on how to deal with the risks are of course also expected. A sensitivity analysis helps, for example, to determine the risk drivers. Once the risk drivers have been identified, there are various ways of influencing their characteristics. The results of the risk analysis thus enable you to prioritize your actions. Discussions about modifications, risk surcharges and even exclusions can be conducted much more profoundly based on the simulation results and the benefits of changes can be substantiated with arguments. 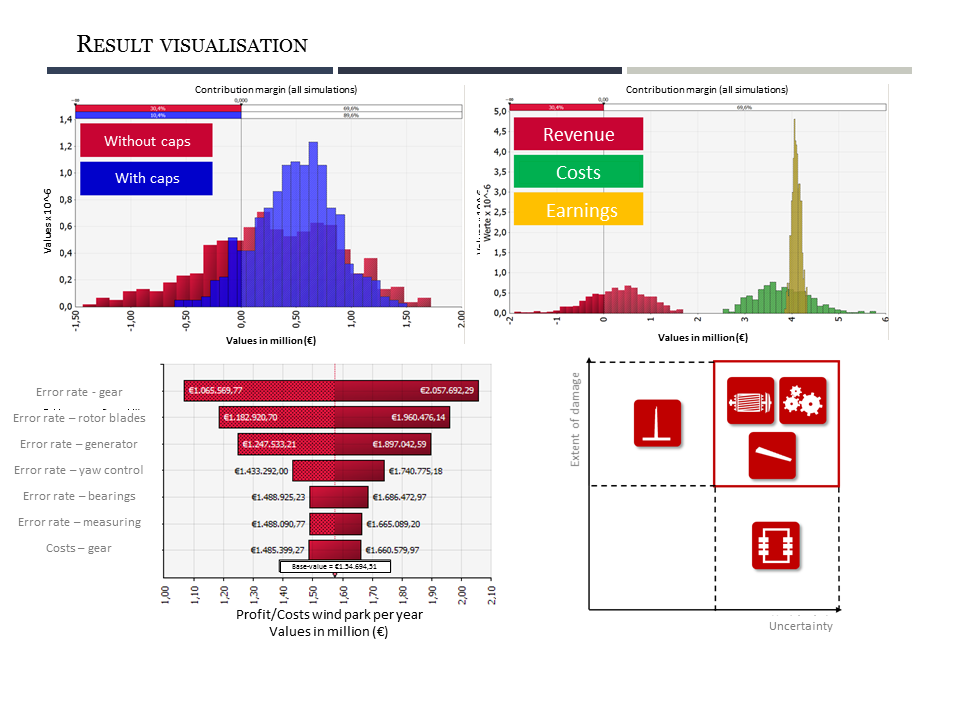 The architecture of modern systems and components is characterized by constantly increasing complexity and a growing networking of different systems. This leads to an increase in the functions of these systems, but also places significantly higher demands on their reliability

A consequence of these interconnections is a more difficult reliability analysis by means of classical mathematical and stochastic methods, which results from unclear mathematical expressions, which are not or only with difficulty solvable, complex technical dependencies or simply due to a too high number of components or subsystems.

The mapping, simulation and analysis of these complex questions in the technical and economic field form the field of application of Monte Carlo simulation.

The possible application areas of Monte Carlo simulation are versatile and can be used for a holistic system, reliability and risk analysis (technical as well as economic).

The IQZ offers you, because of its many years of experience in the field of simulation methods, both the methodical and applied competence for the conception, execution, implementation and support of Monte Carlo simulations in many application areas.

The Monte Carlo simulation (MCS), named after the Monegasque district Monte Carlo with its famous casino, is a simulation method for the modelling of random variables and their distribution functions with the aim to solve certain integrals, ordinary and partial differential equations etc. sufficiently exactly by stochastic modelling. Using the MCS, complex systems of equations of a stochastic or deterministic nature, which cannot be solved analytically or can only be solved with great effort, can be solved numerically (“playfully”) in a mathematical context. The “law of large numbers” forms the mathematical basis.

Today, Monte Carlo simulation is the only practicable method for calculating complex multidimensional systems of equations which cannot be solved analytically or which require a great deal of computational effort. Accordingly, the MCS is used not only in the physical field but also in game theory and mathematical economics, in the theory of message transmission and, last but not least, in operation and reliability theory for the analysis and consideration of

In general, it can be said that MCS is gaining more and more importance in industry, since complex and expensive field tests can be replaced completely or partially by computer simulations. Among other things, this has the advantage that material and test costs for field and laboratory tests can be saved, the test conditions are identical and the results reproducible. In addition, the results can be easily compared and analyzed with those of other simulations.

The quantitative risk assessment (QRA) is used to asses the risk of technical systems taking into account the event and exposure sequences. During a quantitative risk assessment, hazards are identified and assessed, the corresponding event sequences (scenarios) are mapped allowing for the technical safety levels and the resulting exposure sequences are modelled, analysed and assessed on the basis of the site environment.

The quantitative risk assessment is often used in practice to analyse and asses hazardous incident sequences with a high risk potential. Methods such as FMEA, HAZOP, event tree analysis, fault tree analysis and Monte-Carlo simulation are used and combined to perform the steps hazard identification and assessment, event and exposure sequence as well as risk assessment.

What we can offer:

We can offer the necessary tools, we draft the quantitative risk assessment and help you prepare the necessary documents – get in touch, we will be glad to help.

Get in touch with us!

You’ve got questions about risk management??
Feel free to contact us!

Our newsletter is only available in german. If you still want to apply, you can get to the newsletter-form by clicking here. »